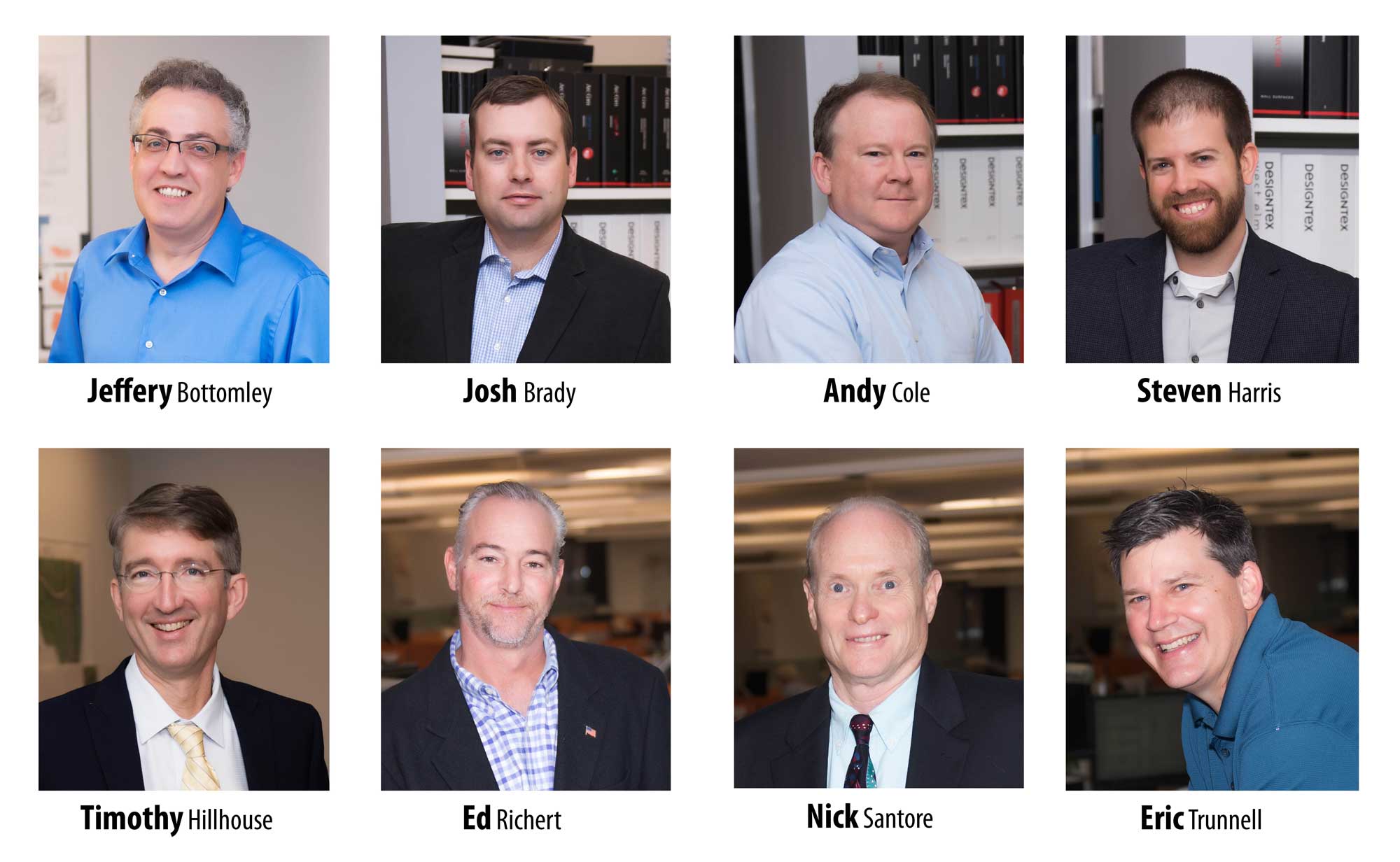 O’Brien Atkins is pleased to announce the following promotions to firm Principal.

Jeffery has been with O’Brien Atkins for 19 years and served as Senior Design Architect for the Durham Police Headquarters, Biogen BIO 26 Administration Building, NC National Guard Headquarters | State EOC and the State Employees’ Credit Union (SECU) Downtown Raleigh Office Tower, among other projects. He also serves as Project Manager for the Durham Police Headquarters, which is currently under construction.  Jeffery is an award-winning designer whose talents include project management. His design career encompasses a variety of large-scale projects with an emphasis on science/high technology, mission critical, educational  and custom designed corporate offices. He is currently designing Wake Tech’s RTP Campus Classroom Building 2 and participating in the updating of the Wake Tech RTP and Southern Campus master plans.

Josh joined O’Brien Atkins upon graduation from NC State University and has served the firm for 14 years. He is a Senior Design Architect and is currently collaborating with Durham County on the transformational renovation of the former Judicial Building into the Administration II Building, in Downtown Durham. Other projects in his portfolio are the most recent O’Brien Atkins’ office renovation as well as the Powhatan Human Resources Training Center for Novo Nordisk. Josh is also a talented space programmer and enjoys that phase of the design process as it sets the stage for a design solution. He served Duke University Development Group in this role for their Downtown Durham City Center One Building interior fitup. Josh’s strong understanding of county government has been gained through planning and design projects for Chatham, Durham and Wake Counties.

Andy is a Senior Architect who has been with O’Brien Atkins for 16 years. His attention to detail, code knowledge and understanding of how to organize for successful outcomes, have been key factors in the firm’s successful design and delivery of the Raleigh Convention Center, the NC DEQ Headquarters, the State Employees’ Credit Union Downtown Raleigh Office Tower and currently, the new Student Union at NC Central University. Andy has served as Senior Architect on various O’Brien Atkins engineering-led projects as well. He has successfully coordinated projects from inception, through design documentation, code compliance and construction, to final completion and owner occupancy.

Since joining O’Brien Atkins in 2008, Steven has served on numerous high technology, educational and custom corporate design project teams. Currently, Steven is leading new classroom building projects for both Wake Tech and Durham Tech. His corporate experience includes multiple projects for Avaya, including their headquarters interior fitup in Durham, as well as test fits/space standards for Avaya global office locations. In addition, Steven is serving Karlin on its Parmer RTP Development (the former GSK campus) with conceptual planning and an amenities hub design | documentation | construction. As a Project Manager, Steven has an integral understanding of the firm’s staffing and billing projections process and was instrumental in a revamp and subsequent implementation of data input and analysis, which has led to more accurate projections.

Tim relocated from St. Louis and joined O’Brien Atkins in 2000.  Tim’s knowledge of project organization and his informational/technical expertise produce connected, informed and streamlined projects. Representative examples of his experience are many Biogen RTP renovation projects, Raleigh-Durham International Airport Terminal 2 and, most recently, serving as Project Manager for the Duke University Trinity Residence Hall project. This residence hall has, in the client’s words, “raised the bar.” Continuing the Duke University relationship, Tim is currently managing their Development Group’s interior fitup in the City Center One Building in Downtown Durham. He has strong technical expertise and had significant influence on the upgrade and implementation of high technology in the firm’s offices, as well as leading the O’Brien Atkins’ website redesign committee.

Ed joined O’Brien Atkins in 2009 as Director of Mechanical Engineering. He brings a well-rounded base of engineering knowledge to every project and has held engineering positions in manufacturing, facilities engineering, engineering consulting, and mechanical contracting during his 25 years of engineering experience. Ed is an expert in the design, start-up, and commissioning of mechanical systems and has led O’Brien Atkins’ engineering projects for Raleigh-Durham International Airport, CiVenti Chem, KBI, Proto Labs, Raumedic and Pharmavite, among others. He and his group are key team members for the firm’s interdisciplinary projects designed for such clients as Avaya, Biogen, Credit Suisse, Duke University, Durham County, State of North Carolina and others. As a discipline leader, he has developed a highly qualified group which is able to work seamlessly on interdisciplinary teams or on independent engineering-focused projects.

Nick serves as Director of Electrical Engineering and joined O’Brien Atkins in 2008. As discipline leader, he has built an accomplished and well qualified team which is responsible for the conceptualization and design of power, lighting and fire alarm systems. He is an Uptime Institute Accredited Tier Designer for data systems and his professional background includes electrical engineering systems design for highly classified facilities. During the design of the  NC DEQ Green Square Complex (Nature Research Center and the NC DEQ Headquarters) Nick was instrumental in convincing the State to use LED lighting throughout both complexes – a first for the State – and a significant factor for both facilities achieving LEED Platinum certification. In addition to serving as discipline leader, Nick actively markets and has delivered electrical engineering focused projects for Delta Airlines, Duke Energy and Raleigh-Durham International Airport.

Eric joined O’Brien Atkins in 2000. A graduate of NC State University, his design career includes a variety of large-scale architectural projects with an emphasis on science/high technology and custom corporate. Eric served as the Senior Architect on the North Carolina State Laboratory for Public Health & Office of the Chief Medical Examiner – a 182,000 sf facility containing many types of laboratories including BSL3 labs for tuberculosis, bioterrorism, chemical terrorism, and virology. Eric also served as the Senior Architect on the Dr. Richard Dean Biomedical Research Building in Winston-Salem. Currently, he is serving Biogen, Credit Suisse, Infosys and Raleigh-Durham International Airport on various fast-track renovation/fitup projects. Eric brings professionalism and thoroughness to all of his work and is known for his attention to detail.