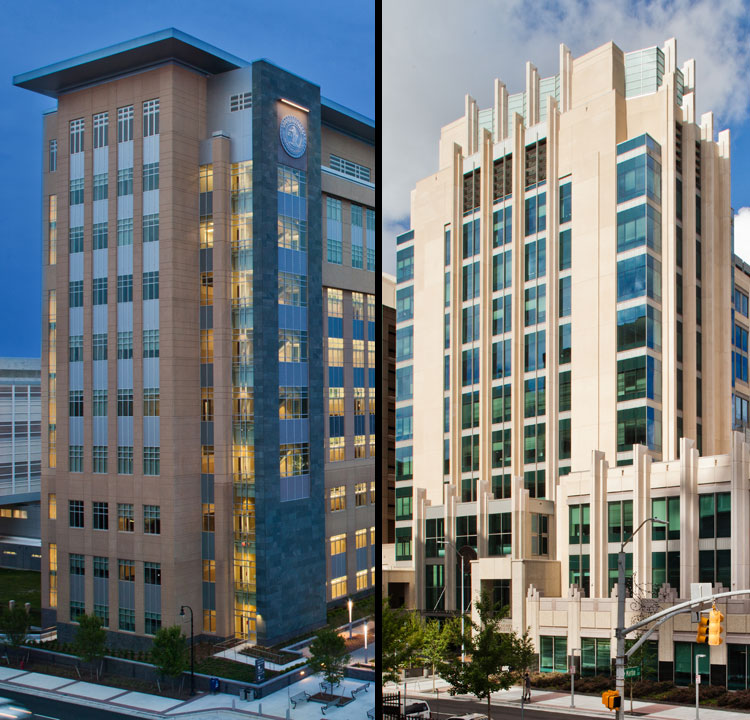 The New Design of Justice

In 1999 and 2000 respectively, both Durham and Wake Counties, NC, began the process of Master Planning their capital improvements for the next 20-30 years. Both counties began to see a large growth in population, Durham having an average growth of 2.5% per year and Wake County 6.1% average growth. Seeing this large change in population spurred both counties to re-evaluate their facilities and capital expenditures.

Durham County had built its former courthouse in 1978, and at the time it was reported not to have enough courtrooms to fit its current workload, essentially being out of space the day it opened.

The new Durham County Courthouse and its terraced plaza serve as the keystone for a complex of government buildings that straddle the rail line at the southern edge of downtown Durham. The building is sited next to the existing detention center and across from the Durham Performing Arts Center, the Durham Bulls Athletic Park, and the renovated and repurposed American Tobacco Campus.

Design inspiration for the Courthouse came, in part, from the County’s assemblage of public buildings, including the 1922 historic courthouse. The new courthouse is transitional in its planar architecture of brick, glass, and slate, yet is clearly expressive of today. Articulated brick and large windows on the south facade mark the public lobbies on court floors. This prominent elevation features a formal entry pavilion and stair tower expressed in slate. Light-filled public spaces and courtrooms symbolize the openness and impartiality of this country’s legal system and humanize the setting for visitors, judges, and staff. The ceremonial staircase features a mosaic of historic photographs that pays homage to the history of justice in Durham. The facility houses the Office of the Sheriff, District and Superior Courts, Public Defender, District Attorney, and the Clerk of the Court. The courthouse effectively consolidates all of the judicial functions into one central location, creating a true judicial campus for Durham County.

Designed for civic pride and the welcoming accommodation of all users, the Wake County Justice Center seamlessly integrates both the modern and historic aspects of North Carolina’s Capital city. It conveys openness and decorum while maintaining the private citizen as focus.

Challenged with one of the highest rates of population and case load growth in the nation, this facility houses two major functions serving its citizens; the County Criminal Courts and the County Public Records and Administration offices. The 11-story facility encompasses 576,996-square-feet and has the capacity for 20 new criminal courtrooms equipped with state-of-the-art technology, as well as more space for court support, including the Clerk of Court and Public Defender. The new Center also includes a new County Commissioners’ Meeting Room and County administrative offices. The site is bordered by the existing Public Safety Center, which is connected via a subterranean tunnel. Major city streets border the Center on the other three sides, resulting in a building with deliveries of goods, services, and the transfer of detainees to occur underground.

The design of the Wake County Justice Center aims to serve large volumes of building users in a highly efficient but gracious manner. The high-volume District Courtrooms for criminal and traffic cases are located on the lower three floors and can accommodate over 100 spectators in the gallery. These floors are served by elevators and escalators to move people to and from court as quickly as possible. The ground level features a special Disposition Courtroom suite with a large processing area that includes a kiosk with work space for a clerk, magistrate, district attorney and cashier. There is a large, specialized courtroom that can process over 300 cases each day, and an ancillary hearing room for cases that can be disposed of by a magistrate.

Both of these projects were featured in the AIA Justice Facility Review for 2014.