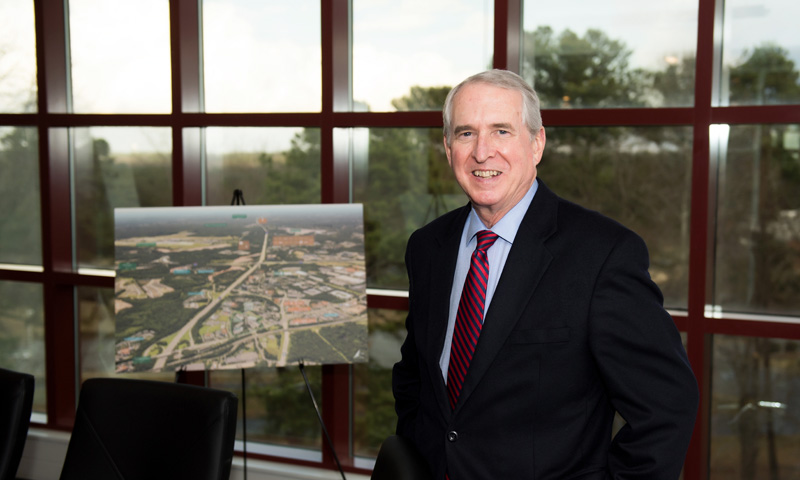 We are pleased to share that the Japanese Government has conferred the Order of the Rising Sun, Gold Rays with Rosette on our Chairman & CEO John L. Atkins, III, FAIA.  Mr. Atkins was conferred this honor as a result of his ongoing contributions in promoting exchange and friendly relations between Japan and the United States for nearly 50 years. This is an extraordinary honor, and we at O’Brien Atkins are extremely proud and appreciative of the work that he has done in reaching out to Japanese entities professionally, economically, and culturally.

Please see below for the full press release.

Having engaged with Japanese companies for most of his career, he continues to have a strong commitment to enhance friendly, professional, and economic relations between North Carolina and Japan.

Mr. Atkins is especially committed to strengthening economic ties between Japan and North Carolina. In 2008, he joined Mr. Hiromasa Yonekura, Chairman of the Sumitomo Chemical Co., Ltd., to Co-Chair the 32nd Annual Joint Meeting of the Southeast U.S./Japan and the Japan-U.S. Southeast Associations (SEUS Japan) in Raleigh, North Carolina and the SEUS Japan 33rd annual event held in Tokyo in 2009.

In 2010, Mr. Atkins was appointed Honorary Consul General of Japan in Raleigh to support and promote ties between Japan and the State of North Carolina, in particular economic ties, based on his extensive experiences.

During his time as Honorary Consul General, Mr. Atkins provided substantial support to the Consulate General of Japan in Atlanta in building relationships with North Carolina’s leadership, including several governors and commerce secretaries. Also, his cross cultural assistance to the NC state government officials during their visits to Japan and meetings with Japan’s top executives was and continues to be invaluable.

His tireless efforts are recognized for his support of consular services and relief efforts during the Great Earthquake of Japan in 2011, as well as his support of numerous activities with the North Carolina Japan Center, the Nippon Club of the Triangle, Triangle Japanese Business Association, the Japanese Association in Charlotte and Durham’s sister-city relationship with Toyama-city, Japan.

It is for these contributions that Mr. John L. Atkins, III is being recognized by the Government of Japan.

Mr. Atkins earned a bachelor’s degree in architecture from North Carolina State University in 1966. He went on to earn a master’s degree in regional planning from the University of North Carolina at Chapel Hill in 1970. Atkins served two years in the US Army with a one-year tour of duty in Vietnam where he was awarded the Bronze Star.

Mr. Atkins has received numerous accolades throughout his career. In 1991, he received the prestigious honor of being elected to the American Institute of Architects’ College of Fellows. He was a founding member and former chair of the NC State Board of Visitors, and a member of the board of trustees of NC State’s Endowment Fund. In 2003, Mr. Atkins was recognized by NC State University with its highest nonacademic honor, the Watauga Medal.

The Triangle Business Journal’s CEO of the Year in 2015, Mr. Atkins has an extensive resume in economic development activities. Serving on numerous state and regional committees, and playing a major role in establishing the Raleigh-Durham Regional Association in 1990, which became the Research Triangle Regional Partnership. He also co-founded the Greater Triangle Regional Council, was involved with the N.C. Partnership for Economic Development in the 1990’s, as well as, the Economic Development Coalition 2000. He served as chairman of the board of directors of the N.C. Biotechnology Center and currently serves as chairman of Wells-Fargo Bank-Durham Advisory Board. He is a past president of the Durham Chamber of Commerce. Atkins currently serves as a director of Alexandria Real Estate Equities (NYSE:ARE).

Mr. Atkins experience includes serving on the Secretary of the N.C. Department of Commerce’s Senior Advisory Council and the N.C. Department of Administration’s/Governor’s Historically Underutilized Businesses Advisory Board. In 2009, he became Chairman of the board for The North Carolina Railroad Company, which manages the 317-mile rail corridor extending from Morehead City to Charlotte and was also instrumental in the growth of the state’s life-science industry. Mr. Atkins recognizes that the competition for jobs creation is a global initiative.

About Conferment of Decorations on Foreign Nationals by the Government of Japan:

Decorations are bestowed upon individuals in recognition of their services to the nation or public.  There are two types of decorations that are awarded to foreigners: ceremonial decorations presented to state guests upon arrival, or to diplomats leaving office, and decorations conferred on foreigners who have made notable contributions to enhance bilateral relations. The latter is conferred twice a year on April 29 and November 3, or upon arrival or departure.

About the Consulate General of Japan:

The Consulate General of Japan in Atlanta is an overseas establishment of the Government of Japan. The main function of our office is to protect Japanese nationals and economic interests, provide consular services, and cultural exchange. In addition to the Embassy of Japan, there are 17 Japanese diplomatic missions in the United States. The jurisdiction of our office is Alabama, Georgia, North Carolina, and South Carolina.