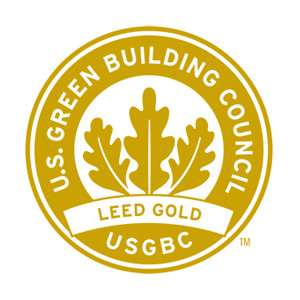 Prominently sited in Downtown Durham’s historic heart, the 11-story Courthouse is located adjacent to the existing Durham County Detention Center (also designed by O’Brien Atkins.) A key design consideration was the County’s desire for the Courthouse silhouette to take prominence over the Detention Center.  With its placement, stately civic plaza and 11-story height, the Courthouse is now the signature, civic profile as one enters the City or views it driving by on the freeway.

With 16 courtrooms in operation, the Courthouse was designed with an expansion capacity to 24.  Circulation systems that stitch the building’s various programs together are separated into three distinct zones: public, private, and detainee.  Each of these three zones is secured by building security systems as well as the Sheriff’s office.  Access to each of the three circulation zones is limited according to user type.  The public corridors are organized along the south edge of the Courthouse, south of the courtrooms, and they provide a clear wayfinding system for building visitors.  Judges and select building staff have access to the private circulation zone, which includes a pair of private elevators and a private corridor on the north side of courtrooms.  The private zone is accessible from the secure parking area to the north of the courts building.  Sheriff’s staff and detainees have access to the detainee circulation zone, which includes a secure connection to the existing detention center, a central holding area, two detainee elevators, and a series of secondary holding areas off the elevators that connect to the courtrooms.  The courtrooms are the interface spaces, where people from all three circulation zones come together for court proceedings.

This civic structure has an associated 897-car parking deck.